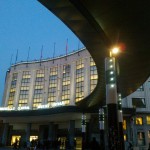 Entrance of the Central station 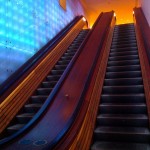 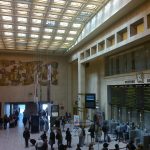 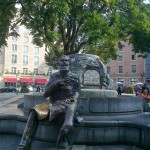 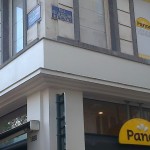 To the Grand-Place via the Heuvelstraat

The Central station building was designed before World War I, in the 1930s, by the famous art nouveau architect Victor Horta. It was a complicated and luxurious design – the station has 3 levels – because it it had to receive many dignitaries and special guests. After Horta’s death in 1947, architect Maxime Brunfaut took over his task. Although there are only six tracks, this station is, thanks to its convenient location, the most widely used train station in Belgium. To get to the Grote Markt it is best to take the Horta gallery exit (next to the Spanjeplein / Place d’Espagne with the statues of two famous figures from Spanish literature: Don Quichot and Sancho Panza).

On the Agoraplein you can see the Karl Buls Fountain. Charles Buls (1837-1914), a humanist and flamingant, was a liberal politician and former mayor of Brussels. Karel Buls lived in the house on Agoraplein, where at the moment there ’s well-known hamburger restaurant.

To the right of the Agoraplein you will find the Sint-Hubertus galleries. Nearby, via the Heuvelstraat you can walk to the splendid  Grand-Place/Grote Markt.

To go to the Kunstberg, leave the station via the main entrance and turn immediately to the left.